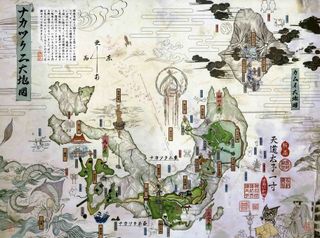 If you're drama-lit savvy, you may be thinking of a clever Oedipus quip about my wife's and mother's birthdays falling on the same day. Save it. I've heard it. I work in the theater. ;-)

Anyway, look for Episode 20 of the podcast later this week. In the meantime I've been collecting some terrific 'net nuggets to pass along, and this looks like the perfect moment. So, while I may come to you podcast empty-handed, I can at least offer a few excellent places to visit while you wait.

I just finished co-hosting the latest Thumb Bandits Podcast with Angela and Tracy from ThumbBandits.com. If you haven't visited their site, I encourage you to remedy that situation promptly. Based in Australia, the site features gaming reviews, news, editorials, and lots of other goodies. "By female gamers - For all gamers" is their slogan, and it's an apt one. Listening to previous Thumb Bandits podcasts reminded me how joyful gaming can be when shared with good friends.

The podcast will be posted shortly. My sincere thanks to Angela and Tracy for inviting me and for making me feel so welcome.

Gamers care about the environment too

It's easy to be cynical about events like Blog Action Day. Does anyone pay attention to such calls to action? Do they really make any difference?

I'm tired of cynicism. My wife and I are expecting a baby due next month, and I've been thinking more than ever about how to make her world a better place to live.

Blog Action Day asks bloggers to address the issue of the environment. So here are a few constructive ways game publishers and game players can make a positive impact on the environment.

Let's face it, most of us just want the game. Once we've got it, we don't care much about the packaging anymore. I confess I'm a bit of a collector in this regard, and I enjoy my shelf full of game boxes that show off my gamer cred...but I think I can survive without them.

Got more ideas? Let me know. 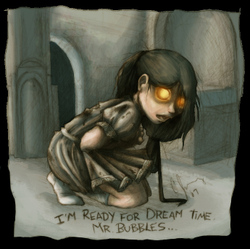 One of the very best things about joining the community of game-related bloggers is discovering all the terrific people hard at work thinking about this medium and pushing it ever forward. Clint Hocking's blog Click Nothing is unfailingly adept at lifting the hood of a game and explaining in clear terms how all those gears and tubes work...and what may need a bit of repair. As Creative Director at Ubisoft Montreal, Clint's ideas go beyond theoretical musings, often beyond what an academic like me is generally equipped to do.

In his most recent post he discusses the dissonance that he sees in Bioshock between the narrative and ludic aspects of the experience:

To cut straight to the heart of it, Bioshock seems to suffer from a powerful dissonance between what it is about as a game, and what it is about as a story. By throwing the narrative and ludic elements of the work into opposition, the game seems to openly mock the player for having believed in the fiction of the game at all. The leveraging of the game’s narrative structure against its ludic structure all but destroys the player’s ability to feel connected to either, forcing the player to either abandon the game in protest (which I almost did) or simply accept that the game cannot be enjoyed as both a game and a story, and to then finish it for the mere sake of finishing it.

It's important to note that Hocking loves the game and admires it on many levels. It comes closer than any game he has seen (and I wholeheartedly agree) to achieving the kind of narrative/thematic unity found in the best cinema:

BioShock is not our Citizen Kane. But it does – more than any game I have ever played – show us how close we are to achieving that milestone. BioShock reaches for it, and slips. But we leave our deepest footprints when we pick ourselves up from a fall. It seems to me that it will take us several years to learn from BioShock’s mistakes and create a new generation of games that do manage to successful marry their ludic and narrative themes into a consistent and fully realized whole. From that new generation of games, perhaps the one that is to BioShock as BioShock is to System Shock 2 will be our Citizen Kane.

You can read the full text of Clint's essay here.
Art courtesy of limabean01 at DeviantArt 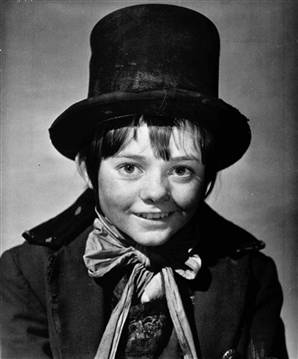 Brainy Gamer readers will surely be interested in The Artful Gamer, described by its author as "in search of the poetic and lyrical in video games." Chris is a fine, astute writer, and I admire his careful and attentive approach to the subjects he covers. In particular, be sure to check out two of his most recent posts: A Game Begins with an Idea:

Making meaningful games is not so much about making games that we ‘like’ or we find ‘entertaining’ necessarily (since feeling angry or depressed doesn’t fit into either of those categories very well) - it’s more generally about finding meanings that accord with human experience. Engineering, tweaking, and re-design all come after we allow our imaginations to roam freely.

and Auteurship, Indie Games, and Out of this World/Another World in which he analyzes one of the greatest games you may never have heard of--(Chris, I played Another World on my old Atari ST, and I was dead certain no game could ever possibly surpass it):

...what is most surprising is that a classic linear story is told without dialogue, captions, or other kinds of exposition. This kind of storytelling stands in the face of contemporary games that inundate the player with checkpoints, hours of expositional dialogue, and quests, practically hammering them over the head with information on where they are located, where they are going, and what they should be doing next.

Go read and subscribe to The Artful Gamer. You'll be glad you did.
Geez, I sound like a carpet salesman.