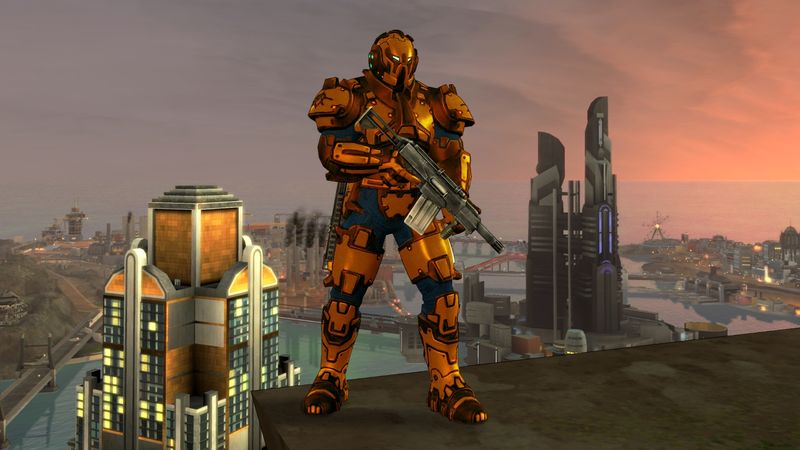 "You are shaping the future of Xbox, and we are better for it."
--Phil Spencer, Head of Microsoft's Xbox Division

One way to understand E3 is as a series of carefully timed PR blasts detonated in the epicenter of America's entertainment industry. No wonder game journalists and pundits talk in terms of "bombshells," "megatons" and which console maker "won" or blew away the competition.. E3 is an awkward mix of artistry, cutting-edge tech and old-fashioned hullabaloo, filled of grandiose proclamations delivered by hucksters with $200 haircuts. It's a thing to see.

A more useful way to understand E3 is as an expression of values from the game industry's Big 3 and a crafted set of signals aimed at the audience each wants to capture or retain. If E3 teaches us how each console maker sees its audience, the lesson we learned from Microsoft this year was especially discouraging.

"[We wanted] to bring a diverse lineup that had something for everyone. We wanted to show broad appeal and we wanted to curate this show."
--Yusuf Mehdi, Chief of Marketing and Strategy for Xbox [1]

It's hard to see how this "curated" presentation of forthcoming Xbox games could be seen as having "broad appeal" and "something for everyone." That is, unless Microsoft has narrowed its audience to a core group of gamers that 1) no longer comprises a diverse and sustainable base of consumers; 2) isn't growing; 3) has restricted its gaming appetite to mildly differentiated killing simulators.

I'm hardly the first to observe that the Xbox press briefing felt like a hostile place for gamers like me. As I've noted before, the problem isn't ethics. I have no issue with shooters per se - I'm currently blasting Nazis in the new Wolfenstein and loving it - the problem is homogeneity. I wasn't offended watching the Xbox briefing. I was bored.

"I thought overall we had a really solid cohesive collection of killing simulators."
"I liked the part in the Call of Duty trailer where they killed the guy by throwing the grenade, and it hit the guy, and he blew up."
--Justin McElroy and Chris Grant sardonically wrap-up the Xbox briefing for Polygon

So how bad was it? I decided to break it down, and here's what I found (click to enlarge): 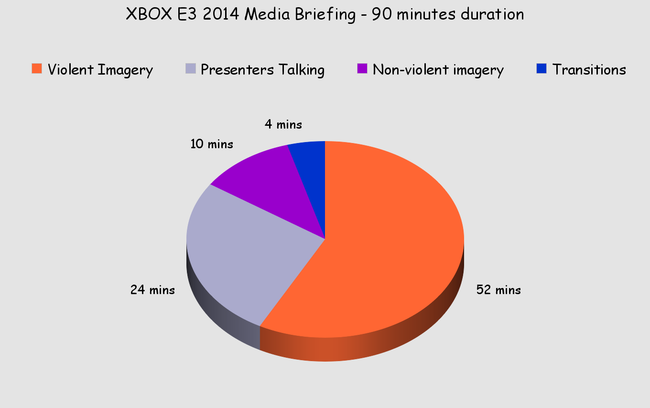 58% of Microsoft's E3 briefing contained images of characters killing, preparing to kill, or otherwise battling a deadly on-screen enemy. (52 mins out of 90 total). I applied this definition of "violent imagery" fairly lightly. Ominous situations suggesting pending havoc (e.g. Tomb Raider trailer at Xbox briefing or much of Bloodborne trailer at Sony event) were tallied as non-violent.

But it's telling to note that early in their respective briefings, Microsoft and Sony each devoted 8-and-a-half minutes (the longest game demos in each event) to important marquee titles. For the Xbox One: Call of Duty: Advanced Warfare. For the PS4: LittleBigPlanet 3.

It's also worth noting tonal differences between the two. The Xbox briefing began with a blackout in the auditorium, followed by pounding music, a brief image of the Xbox One hardware (somehow made to feel menacing?), then a chaotic sizzle reel of explosions, gunfire, and mayhem culminating in the appearance of Phil Spencer.

The Sony event began with piano music and swirling blue images of Playstation iconography, gently segueing into a 4-minute trailer for Destiny - ironically, a shooter - featuring a Mars landing, voice-of-god backstory (velvety VO by Lance Reddick Bill Nighy, thanks to commenter Jason for correction), and images of planets underscored by a Halo-esque vocal chorus. Finally, over halfway into the trailer, the shooting begins.

"There's one mistake that they all make, and that mistake is listening to their customers."
--Jesse Schell at the Barcelona Gamelab conference last August [2]

Microsoft believes the Xbox One stumbled out of the blocks because it focused too much on DRM issues and positioning the system as a home entertainment hub. That may be, but their original vision for purchasing and managing one's games was more progressive than angry customers claimed.

By capitulating to its base and sending the loudest possible "we got you, Bro" to its core customers at E3, Microsoft alienated a far larger, more diverse, and faster-growing audience of gamers - an audience Sony and Nintendo will happily serve. It's a classic case of "innovator's dilemma,"described by Jesse Schell at the Barcelona Gamelab Conference last August.

"The problem for Microsoft...is that while the subsequent outcry came from a relatively small section of the gaming audience, it is nevertheless impossible to ignore. The problem is that the hardcore folks always want the same thing: 'We want exactly what you gave us before, but it has to be completely different.'[3]

If Phil Spencer and team genuinely want to "showcase the passion, creativity and potential behind the fastest-growing form of entertainment in the world" [4] they should listen a little less to their "core" market and focus on fostering the kind of creativity likely to realize that potential.