The wreckage and the way out 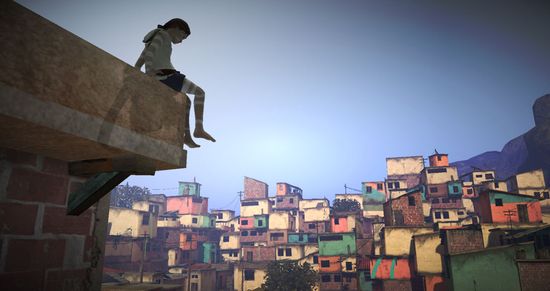 I tried hard not to write this post. I finished Papo & Yo three weeks ago, and each day since, I promised myself I would sit down and write about it. But each day I found a new way to dodge the job. Too busy. Couldn’t find the words. Moved on to other games. Who cares what I think anyway? Always a reason to avoid facing the empty page and the memories.

For five years I’ve written about all sorts of games here. Papo & Yo is the first to incapacitate me; to make me feel awkward and inadequate to the task. Papo & Yo brought me face-to-face with painful truths I've never addressed. It resurrected pieces of my childhood long buried in the dirt. It took me where I've never wanted to go. Back to my father, and that fearful time, and all the wreckage.

Papo & Yo opens with a boy alone in the dark, cowering in the corner of his room as a growling monster paces outside his door. Trapped and petrified, the boy hugs his favorite toy, hoping the danger will pass. Suddenly a mysterious glyph appears on the wall: a magical escape portal summoned, we soon learn, by his imagination. He gathers his courage, rises, and walks toward it. Nearly everything we need to know about this boy is conveyed in these few vivid moments.

Papo & Yo is not a sentimental game. Instead of gently liberating him from the monster, the portal forcibly ejects the boy, tossing him head over heels onto the stone pavement where he lands in a heap. A young girl beckons him through a mysterious door that disappears when he draws near it, and she revels in confounding him. The monster reappears, burning with rage to chase and assault him. Soon a white chalk line will inexorably draw him to revisit violent images from his past. Death, abuse, and reckless violence unfold, and Quico is powerless to dispel them. He must learn to adapt. Accept. And let go.

Papo & Yo is a “puzzle-platformer” like Vertigo is a “suspense-thriller.” Its genre trappings frame far more important elements that convey the game’s nature and ambitions. When Quico rearranges the favela, bending buildings like vinyl tubing, it’s possible to see this reconstruction as absurdly easy puzzle-solving.

But doing so presumes “gameplay” cannot be abstracted in the ways we routinely abstract other design elements. In other words, instead of assuming Papo & Yo’s puzzles were designed by hopelessly incompetent puzzle-makers, why not consider the possibility that their simplicity communicates something essential about the story this game wants to tell?

Papo & Yo is about a boy who makes a magical playground out of a place many would consider a hellhole. Quico’s challenge isn’t solving puzzles. There is nothing puzzling about his existence. Quico is painfully well acquainted with his dire existence. His challenge is to survive and overcome a sinister reality. Activating gears and rearranging buildings are simple means to evocative ends. Quico runs and climbs and imagines he can fly because that’s what a 10-year-old boy does. He uses his superpowers to transform the world around him, and the game situates these actions - all metaphorical - at its core.

When Quico locates a hard-to-reach a gear (a gear, of all things) and makes it turn, can we not see it as more than a puzzle piece, collectible, or Achievement? Can we afford a game designer the same opportunities we offer other artists? To repurpose language. To re-frame imagery. To render the commonplace poetic.

One major game site (which scored the game a 4 out of 10) complained the puzzles “are about process, not challenge, so there’s no sense of reward for what you accomplish.” I can only assume this writer has a very different notion of “process” and “reward” than me. In Papo & Yo, the process is the reward. After 30+ years of evolution, must we limit our appreciation of games to the utility of their feedback loops?

An abusive father leaves a trail of suffering and psychological debris in the minds of his children. My mother, my sister and I know this well. The only escape is forgiveness. I have never been able to find my way there.

Papo & Yo’s final twenty minutes offer a path to that liberation and beautifully illustrate its transformative power. For the first time in my life, with a controller in my hands, I lived in that free place, inhabiting a courageous Brazilian boy. If Papo & Yo missteps, it makes choosing that treacherous path look easy. But I’m grateful to Quico, my brother, for showing me his way. I hope someday to make it mine.