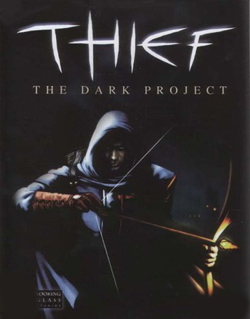 Violence is the mark of the amateur. Don't kill anyone. --Thief: The Dark Project

Only a handful of games can legitimately lay claim to establishing a new genre. Thief is one of them. While other stealth games preceded it (most notably the Wolfenstein and Metal Gear series), Thief was the first 3D game to fully exploit the depth and immersive experience of stealth as its primary, defining gameplay mechanic.

Thief was the first stealth game to use sophisticated audio cues, light, and shadows as tools for the player. It encouraged patience and deliberation. When it arrived a decade ago, it seemed to offer a thoughtful and imaginative alternative to the sea of FPS titles that dominated the PC gaming scene, and its influence on subsequent games and game designers can easily be seen.

I'm delighted to announce that Thief: The Dark Project is the next selection of the Vintage Game Club. Our collective playthrough begins October 17. All are welcome to join us.

In case you're not familiar with the VGC, we started the club a year ago in hopes of creating a friendly place where members can collectively play through older games, sharing our thoughts and observations with each other along the way. 7 games and 5200 forum posts later, we're still playing and the club is going strong.

The VGC is for people who may have missed some of the classic titles gamers often refer to. It's also for people who enjoy revisiting older games to see how they hold up after all these years. Anyone who loves playing and discussing games is welcome to join in.

As I've mentioned in the past, we all have busy lives, so the VGC is a no-pressure environment. If you decide to start a game with us, but can't continue it, or if you post a comment but can't return to follow up, no big deal. The club is just a framework for bringing us together. Join in, drop out, come back...whatever. We're just here to have fun and broaden our knowledge and awareness of important games. 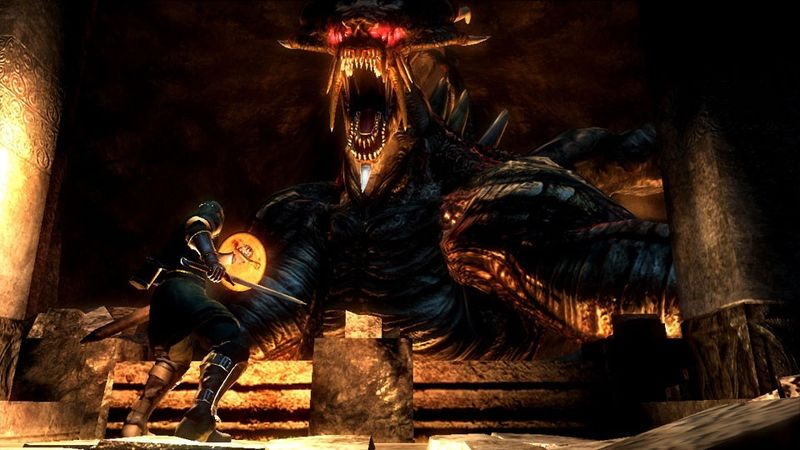 Fasten your seatbelts, it's going to be a bumpy night.
--Margo Channing, All About Eve

I've made no secret of the fact that I'm a fan of Atlus USA and its quality work localizing Japanese games for the western market. I subscribe to their email newsletter, and over the last few months I've noticed a fascinating strategy emerge in the marketing for Demon's Souls, their online RPG that hits shelves tomorrow. Atlus is going out of its way to make sure we know Demon's Souls will be HARD. Really hard.

In its trailers for the game, Atlus includes on-screen quotes from early previews of the game:

It's an interesting approach, and I'm curious to see how it fares. In a gaming environment dominated (at least in terms of sales) by Nintendo and a marked rise in casual games across various platforms, it's easy to see what Atlus is up to here. Lots of core gamers fear what they see as a gradual and persistent industry slide toward easier, some would say 'dumbed down' games, and Atlus appears to be reaching out to that audience and reassuring them that Demon's Souls will offer them stiff resistance.

Atlus' specific target is so-called hardcore RPG fans, and I'm struck by how the imagery and gameplay shown in their trailers reinforce the impression that this game is a big, violent, fantasy-themed western-style RPG, with plenty of footage to reinforce the real-time combat and character customization features fans of Bethesda games enjoy. In fact, it's hard to walk away from these trailers without thinking Demon's Souls looks like the offspring of Oblivion and God of War - and I'm guessing Atlus wouldn't mind that impression at all.

Atlus USA may have recently decided to rein in the hardcore hype a bit. In their latest newsletter they address the issue of difficulty:

Now, this might take some of the magic away for the masochists out there who suddenly think the game is a cakewalk. It’s not, believe us. It's as deep and nuanced as an action RPG needs to be, with secrets to find, rare items to loot, weapon and shield upgrades, and more. But it is not the unfairly brutal, inhumanly difficult game some would make it out to be.

I haven't played Demon's Souls yet, but I'm intrigued (especially by its cooperative online elements), and I look forward to its arrival tomorrow. If you don't hear from me for awhile, assume Atlus wasn't kidding about the difficulty and send a search party, would you? 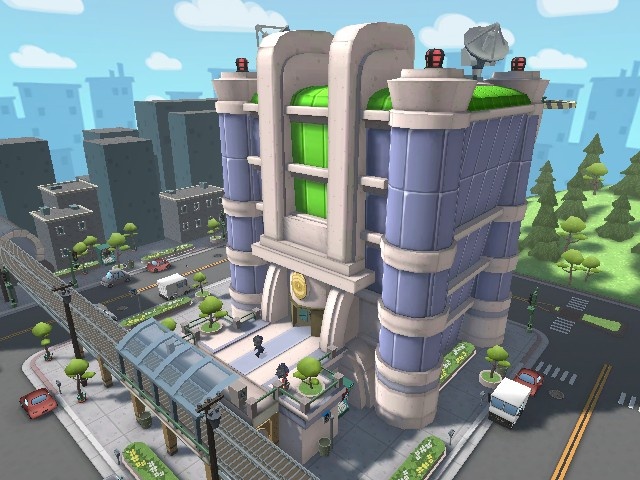 I like MySims Agents. Lots of people won't and for valid reasons. It's repetitive; its gameplay palette is limited to a handful of simple predictable activities; and its target audience resides on the opposite end of the gaming spectrum from the 'core' gang. Based on the quizzical looks I've received from my students, me playing a MySims game apparently doesn't compute. Wasn't I just playing Halo 3 ODST last week?

I like MySims Agents because it's exactly the game it means to be: an affable and stylish mystery adventure with an appealing personality and smart sense of humor. It's cute without being cloying, and it's fun to hang out with. Plus it looks fabulous. Sounds like the perfect date, doesn't it?

EA has struggled to find the right footing for its MySims franchise. The original game - sort of a Mini-Me version of The Sims - established a colorful childlike Mii/Animal Crossing universe and pared the gameplay down to mostly building and collecting. MySims Kingdom added RPG and storytelling elements to the mix, but it still focused on collections quests. Both games had plenty of charm, but after awhile the endless gathering and lack of gameplay variety sabotaged the fun. MySims Racing and MySims Party were essentially exercises in re-branding Mario Kart and Mario Party.

So along comes MySims Agents, and none too soon for the franchise: a game with a unique identity and powerful sense of itself. It's as if Lead Producer Rachel Bernstein and team erased all the whiteboards and asked, "What if we keep the cheerful blocky MySims characters and throw away nearly everything else?" And so, evidently, they did.

MySims Agents de-emphasizes the usual collecting/unlocking/building Sims formula by layering it with adventure/puzzle/light platforming elements. This is where the game finds its voice. You play a special agent "on a mission to uncover and foil the sinister plans of Morcubus, the corrupt CEO of MorcuCorp." As you progress, you receive spy gadgets enabling you to track footprints, pick locks, hack into computers and do molecular forensics, most of which are delivered as minigames. By searching for clues, you identify suspects, eliminate others, and finally solve cases that lead you to the inevitable confrontation with the nefarious Morcubus.

The game smartly sidesteps the old MySims grind by allowing you to use the items you discover and agents you recruit to upgrade your increasingly sophisticated headquarters, enabling you to send your agents on dispatch missions to solve their own cases. As each agent possesses unique attributes, deploying them and equipping the floors of the headquarters where they work requires a bit of strategy. No Grim Fandango-style head-scratchers here, but the designers have wisely figured out how to make the stuff you find useful, rather than merely decorative.

Adventure games have always relied on clever writing and a big sense of style to engage us (I mentioned Grim Fandango for a reason). MySims Agents may not rise to the level of GF in this regard, but it does quite well for itself, with bits of winking dialogue popping up throughout ("The Doctor says I need a gadget, and the only prescription is more megaphone.")

But the real star here is the world itself, courtesy of Art Director Terry Smith. Comparisons to other games are never quite fair, but to me the game looks like a clever alchemy of Sly Cooper's comic book-esque flair mixed with Animal Crossing and Lego Batman, filtered through the MySims design universe. It's a much bigger world than the first few hours of the game suggest, and each environment feels fresh. Despite the limited polygon count, narrow movement tracks and invisible walls, the world of MySims Agents is an inspired series of choices that convey the spirit of the game beautifully.

If you give it a chance (with the caveats I mentioned), I think you'll enjoy playing MySims Agents solo. But if you can, I recommend playing it with a 5-12 year old kid at your side. Give her the controls and let her explore and solve the mysteries herself. You can work together to solve the tougher puzzles, and you can try to guess beforehand who the culprits are. MySims Agents is an accessible game, but not a dumbed down one. If it sounds like your cup of tea, I encourage you to give it a look.